The music industry streets are littered with stories of close calls and broken dreams, with exceptional acts often getting overlooked. While most never get their "day in the sun," sometimes persistence, fate, and luck come together to create magic. Such is a case with Tennessee guitar slinger Charlie Bonnet III, whose rise to fame has taken a quarter of a century to come to fruition.

The story begins in the rural town of Charlotte, Tennessee - a small blip on the map located an hour west of Nashville. It was here that a young Charlie Bonnet III grew up and searched to find an identity for himself. "I was the nerdy kid that always got picked on," he reflects. "Every day after school I would sit in my room and listen to the radio for hours, and just escape from reality. I loved hard rock music and was drawn to the guitar, although I had no idea at the time that it would be my calling in life. I was still at the age where I wanted to be included in things other kids were doing, like sports and boy scouts, but I never got picked."

It was the summer of 1989 when fate stepped in. "A neighbor kid brought a junk guitar over to the house one day and showed me a couple chords. I wasn't any good at it, but it looked cool on me, and it felt like a shield. I would put it on and instantly feel like a different person. I knew right then that I wanted to be a guitar player." That Christmas Charlie convinced his parents to buy him a guitar of his own, and within a few months he was able to play licks from his favorite AC/DC, Aerosmith, and Guns N Roses records. Word got out around town, and by the time high school came, Charlie was playing in bar bands and getting his first taste of performing. "I was about fifteen when we started playing parties and small local bars. I couldn't drive yet, and my band mates were older, so they had to haul me around. The attention I was getting was addictive, and my confidence grew quickly. It was a game changer for me." The path was set and there would be no turning back.

Just before turning eighteen, Charlie and some friends formed the hardcore metal band Disarray, and set out to play the opposite of what was on corporate radio at the time. "We hated radio rock. I was at the stage in life where I wanted to go against the grain with everything I did, and that included music." Disarray was raw and unpolished, a cross between Motorhead and Black Sabbath, but with a southern twist. It was also the first time that Charlie (now adopting the altered name 'Chuck Bonnett') assumed the role of front man in a band. "We couldn't find a singer, so I stepped up and just tried my best to do it. Sometimes it worked, and sometimes it didn't..." he admits. By 1996 the band had self released two albums, and had built a cult following in America. Record labels came knocking, and over the next few years the band recorded two more albums for a small indie company. They hit road punk rock style - living in a van for weeks at a time, and playing any show they could find. By 2001 Disarray had grown into a semi-national act, doing small tours and regional dates with larger bands, such as GWAR, Clutch, and Biohazard.

By the end of 2004 Disarray had recorded one last studio album, but the band was losing steam. "Gas prices doubled and we simply couldn't afford to keep going," says Charlie. "I was forced to file bankruptcy, and by that point I was just about to give up on music. I was very burned out on the never ending struggle to keep a band going." It was time to reinvent his sound, and by the time 2006 arrived, Charlie Bonnet III had returned to the scene as a solo acoustic artist. "It was done out of necessity," he admits. "I could either get a day job and hate my life, or go strum an acoustic three nights a week. I chose the acoustic." Although becoming a bar singer again was humbling, Charlie still managed to record and release a series of acoustic singer / songwriter demo albums, and played the occasional one-off Disarray gig. "At that point my rock star dreams were gone. I figured I had tried and failed, and this was my new destiny. I was now a hobbyist." Once again fate intervened...

The phone rang in January of 2010, and on the other end of the line was an underground rapper known as Big Smo, who was needing a guitarist for a new album. "At first I wasn't interested," says Charlie. "Some of my older fan base had already crucified me over the acoustic records, and I figured this would only add to my musical identity crisis," he states. "I finally decided that I needed to be open minded to it, and I went out to the studio. Thankfully I did. That one phone call changed my life." The two hit it off immediately, and began working on Smo's "American Made" album. Shortly after teaming up, Smo met another similar rap group on the internet, and invited them to Tennessee to collaborate on a track. The song was called "Hick Life," and it featured a verse from Florida native Brahma Bull. "Hick Life" quickly became an underground hit, and the collaborators formed the group Kinfoke, but it was not meant to be. They released one album before splitting into two camps, with Big Smo going on to Warner Brothers Records, and Charlie and Bull forming the band Moccasin Creek. The Creek quickly built a national following, releasing three full albums, a series of singles and EPs, and twenty one music videos. The band completed a fourth studio effort, but parted ways in December of 2014, before the record could be properly released.

In 2015 Charlie signed a deal with Nashville based Dammit Boy Entertainment, and released the critically acclaimed "A Hotel In Valdosta" record. Six music videos followed, and the CB3 internet buzz caught fire. The following year saw Bonnet teaming up with L.A. Guns guitarist Tracii Guns, to record the current CB3 solo offering, "Sinner With A Song." Music videos for the new record are currently under way.

Charlie Bonnet III is now performing as an acoustic solo artist, as well as with his classic rock power trio, Charlie Bonnet III And The Folkin' Gasholes. He has recently designed and released a CB3 signature series electric guitar through the Allen Eden Guitars company, and has become an official endorsed artist for the UK based Blackstar Amplification company. He has music featured on over sixty albums and compilations worldwide, and has collaborated on songs with members of KISS, The Alice Cooper Band, LA Guns, Testament, Megadeth, Grand Funk Railroad, Pro-Pain, GWAR, Exodus, and many others. "When I think back to being a thirteen year old kid with that first guitar, I realize that all my dreams back then have come true. Everything now is just a bonus" he says. "Regardless of what opportunities come in the future, I will keep recording and performing until the day I leave this planet. You can count on that." 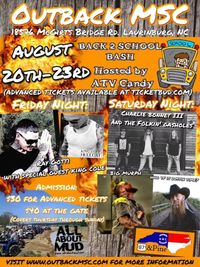 Back To School Bash

Charlie Bonnet III and The Folkin' Gasholes are doing a set of rock n roll for the back to school bash!